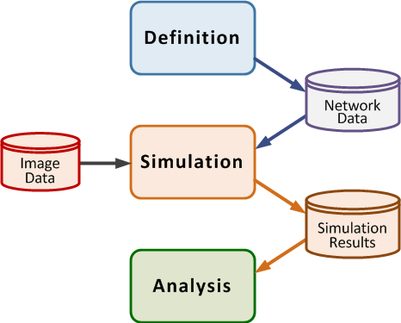 The drawing shows a layer looking from above. It depicts how the output of the origin node (Orange-colored) only affects the inputs of nearby nodes on the same layer.

The random connections are indicated with the green lines. Obviously the drawing greatly over-simplifies the actual number of connections, which can equal the number of total node inputs in a target layer. 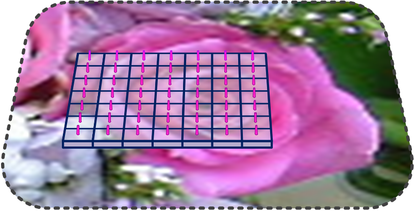 As shown, a Reader sequentially scans each line and sends the values to the network. A Reader is something like a linear Scanner that inputs numbers rather than pixel values.

As is typical, a layer is composed of multiple nodes arranged in a rectangular configuration. Thus, layers are defined by an X-length and a Y-length, defined in node counts.

The drawing shows a small square Scanner window, but windows can be much larger and can be rectangular or elliptical. Scanning can be raster-like, or can be more like human saccades.

Like other ANN simulators, TENSAV can create random connections from an “origin” output to a “target” layer. Each output can connect to any unconnected node input in a target layer. Such random connections  may actually model the connectivity between certain biological brain areas.

Overall, the model looks something like a standard ANN configuration, with multiple inputs, a body, and a single output. However, all input connections to the node are to “synapses”, represented by the dark dots. The synapses are attached to “dendritic segments” which send the input signals to the node body.

The above drawing is very simplified and doesn’t show several planned program capabilities.

Although the drawing shows connections between two node layers, connections can also be from source outputs to layer node inputs.

Connection between brain regions in humans are not that well understood. But connectivity is at least as important as neuron operation in determining the network functionality. What is well known is that different  areas of the brain use different types of connections. 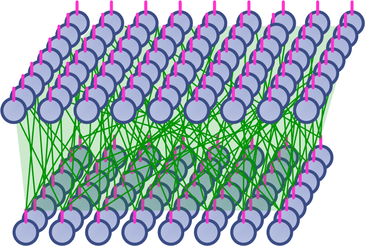 The drawing below shows the overall program usage method. As can be seen, the main suite consists of three programs linked by two data files. A third set of files is used to input the image data.

An additional source type is the “Reader”.  A Reader reads rows of numerical data values from a table stored in a disk file, and sends these values to network node inputs.

However, some brain connections are not random, so TENSAV allows the specification of “mapped” connections.

The drawing shows only four segments with a few synapses each, but nodes can (and should) have many segments and thousands of inputs.

As shown, for a mapped connection each origin node output can connect only to a group of nodes within a

user-defined radius in a target layer. The program allows different types of mapping

A simplified drawing of the TENSAV "node" (neuron) model is shown below.

A very common neural structure is lateral connections from a neuron to surrounding neurons in the same layer. TENSAV can model this by mapping an origin node’s fanouts to same-layer target nodes within a defined radius of the origin node. 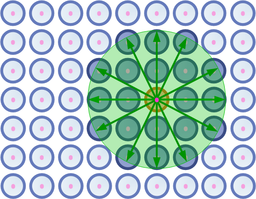 The files are, of course, encoded binary with checksums.

A standard network structure in TENSAV is the Layer array, which is designed to model brain layers. 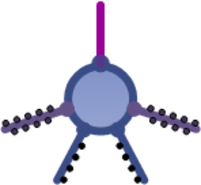 Sources provide inputs to the network. Sources are similar to layers in that they have outputs that connect to node inputs.

The primary source type in TENSAV is the “Scanner”.  A Scanner has a window that moves over an image, as depicted in the drawing below.

A primary requirement is that all nodes in a layer have similar characteristics (the same “node-type”). Different layers can have different dimensions and node-types.

The data values in the table have to be converted to the signal levels used in the network, but a utility program can be used for the conversion.

A Scanner window has multiple “receptors”, where each receptor overlaps one pixel in the image. When a receptor is over a pixel, it sends the pixel color values to the network.

There is no filtering of the image pixels. 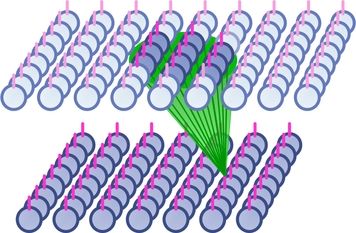